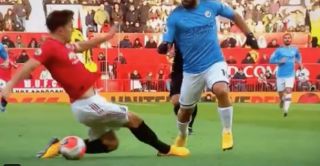 Manchester derbies are almost always high octane affairs with no quarter asked or given by either side.

At Old Trafford on Sunday, Manchester City’s Sergio Aguero put a marker down early in the game with a cheeky piece of skill against Manchester United’s Harry Maguire.

As the United captain slid in for a tackle on the edge of the area, the Argentinian simply put the ball between his legs and left him for dead.

Though the subsequent play came to nothing, the skill was surely appreciated by the travelling support.

Sending 80 mil maguire all the way back to Sheffield pic.twitter.com/4jqVSfxEfl