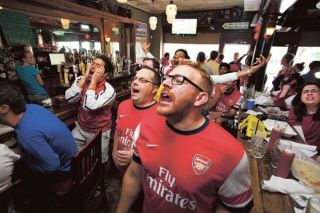 Sky and BT Sports could be banned from broadcasting football games in pubs this season if the coronavirus crisis worsens.

According to a report from the Times, talks have already taken place about potentially shutting down football being shown in pubs if games have to be played behind closed doors.

It seems logical that if big crowds in football stadiums are too risky, then it also makes sense to prevent too many people also gathering together at pubs and bars.

Coronavirus has now hit the UK after starting out in China earlier this year before making its way to Europe.

The crisis has been worst in Italy, with several Serie A games now being played behind closed doors, while this week’s Champions League clash between PSG and Borussia Dortmund will also be played in an empty stadium.

It remains to be seen if this will be necessary in the Premier League, but it may soon be that the only way to watch football is from the comfort of your own home.