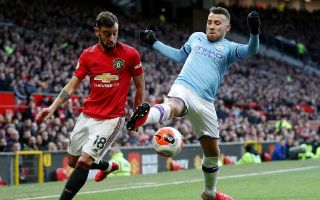 Loads of Manchester United fans are making the same point about new signing Bruno Fernandes after another impressive performance for the club in the 2-0 win over Manchester City.

Fernandes has been a real hit with his classy midfield displays since joining United from Sporting Lisbon in the January transfer window, and he also showed he’s got a bit of attitude about him too by shushing Pep Guardiola during the Manchester Derby.

Red Devils fans are now speculating about how good things might have been for them if they had Marcus Rashford and Paul Pogba fit too, with both these key players missing large chunks of the season.

Pogba has barely played at all this term, while Rashford was in fine form before his injury and is yet to play alongside Fernandes in Ole Gunnar Solskjaer’s team.

Unsurprisingly, these Man Utd supporters can’t wait to see all three players on the pitch together at the same time, and it does look on paper to be a pretty frightening prospect for the rest of the Premier League…

That team is going to be a madness#MUNMCI

Marcus Rashford was in the form of his life before his injury, on course for a 25-30 goal season WITHOUT Fernandes. Think of what might have been if they got to play together. It’s heartbreaking how we won’t get to see it until next season.

Bruno Fernandes has inserted so much wit and depth in our style of play. Such an intelligent player. Imagine Pogba and Rashford in the squad?

Solskjaer has also spoke about the great connection between Bruno Fernandes and Anthony Martial ?

Imagine when Rashford is back and firing with them ??? #MUFC pic.twitter.com/u4s92cDCBd

When Pogba and Rashford comes back into this side we will be a scary opposition to face. The sheer amount of creativity, skill, ingenuity, pace, athleticism and aggression in this side might be too much for teams to handle. All have been made possible with Bruno Fernandes

I can’t contain my excitement at the thought of Pogba and Rashford playing in the same team as Bruno Fernandes. Finally something to be excited about when it comes to @ManUtd. We are almost there. #brunofernandes #pogba #rashford #mufc #ManchesterUnited

I can't wait to really see this lineup from @ManUtd! Just once!

A quartet of Rashford, Martial, Fernandes and Pogba. What a terrifying prospect this would be for the opposition.

Imagine if we had Bruno Fernandes when Rashford was on that mad goal scoring form!!!?

If you think we are somehow better without Rashford then I'd question how you watch football.

Bruno Fernandes has improved us massively and is the reason we're creating so many chances in Rashford's absense. When he's back you'll see us slap teams about. https://t.co/MiBydOjJNP