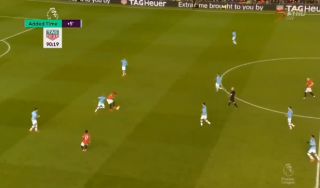 Manchester United striker Odion Ighalo is proving a very successful loan signing indeed, and not just because of his goals.

The Nigerian was no doubt brought in with the view of being a low-cost, low-risk and short-term solution to United’s lack of options up front, but he’s quickly established himself as a real cult hero at Old Trafford.

Not much to see here, just Odion Ighalo bringing the ball down perfectly from an 80 yard pass from De Gea. pic.twitter.com/vfcwsjQRsQ

And as well as that, he’s shown he can really play too, with this clip above showing his sublime first touch from a long ball down the field from goalkeeper David de Gea.

Man Utd fans were dubbing Ighalo the Nigerian R9 last week, and skill like this shows they might not be so wide of the mark!