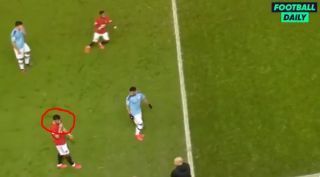 Manchester United fans are already in love with new signing Bruno Fernandes, but he has now undoubtedly cemented instant legendary status at the club.

Bruno Fernandes shushing Pep Guardiola is what the Manchester derby is all about ? pic.twitter.com/kvzwivmGBC

Guardiola can be seen shouting from the touchline, and Fernandes is clearly not too impressed with the City boss as he raises a finger to his lips, gesturing at him to quieten down.

United fans will love this from the Portugal international, who is clearly a bit of a character as well as being a quality performer on the pitch.