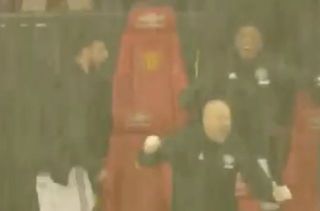 Man Utd secured a 2-0 win over rivals Man City on Sunday and the celebrations after Scott McTominay’s goal were on show on the bench too.

The United midfielder wrapped things up deep into injury-time with a long-range strike after an Ederson blunder, with the Red Devils securing all three points.

It was a huge boost in their pursuit of a top-four finish in the Premier League, while it also gave them bragging rights in Manchester.

Judging from the scenes on the bench, particularly from Bruno Fernandes and Anthony Martial as seen in the clip below, the entire squad were loving it as spirits will no doubt be sky high after such a huge win.

Man Utd are in good form and looking confident at just the right time, and with the atmosphere within the squad clearly positive right now, it remains to be seen if they can close the gap to Chelsea and achieve their key league objective while also remaining in contention for trophies with the FA Cup and Europa League up for grabs still.

One thing looks clear, Sunday’s win will have them all in a buoyant mood ahead of facing LASK on Thursday evening…