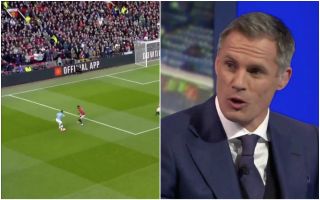 Liverpool legend Jamie Carragher was full of compliments for Manchester United’s Aaron Wan-Bissaka after the star’s phenomenal performance against Manchester City on the weekend.

Carragher hailed the right-back as the world’s best full-back at 1 on 1 defending. Wan-Bissaka kept City superstar Raheem Sterling quiet for the entire game.

The Sky Sports pundit even urged Pep Guardiola to not put Sterling up against the Crystal Palace academy graduate in the future.

Carragher suggested that Sterling should be played on the opposite wing, he even claimed that the style of playmakers like Phil Foden or Bernardo Silva would have more success against the 22-year-old.

The retired England international even fired a warning to players that ‘try to run at him (Wan-Bissaka)’, adding ‘you won’t go past him’.

Take a look at Carragher’s analysis below, pictures from Sky Sports:

"I don't think any player can get the better of him one v one" @Carra23 analyses the fascinating battle between Aaron Wan Bissaka v Raheem Sterling pic.twitter.com/tQFdRZWOL6