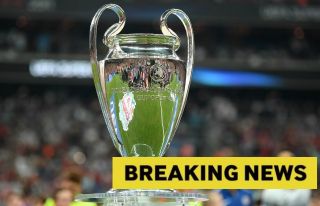 UEFA are reportedly seriously considering suspending the Champions League this season after the upcoming round-of-16 ties.

A few games are already set to be played behind closed doors, but it seems Europe’s top club competition could follow Serie A in simply suspending the tournament.

MORE: PSG vs Borussia Dortmund Champions League clash to be played behind closed doors due to coronavirus concerns

Italy has been one of the countries most badly affected by the outbreak of coronavirus this year, and as such there will be no Serie A games for at least the next month.

It remains to be seen how the rest of Europe will follow suit, with coronavirus starting to spread in the UK as well, though no major precautions have yet been taken to try and clamp down on the spread of the illness.

There has been talk of Premier League games perhaps also being played behind closed doors, as well as pubs being banned from showing football to try and prevent large groups of people gathering together in public.

It would be a shame to see the Champions League suspended, but it seems this is now a very real possibility and of course the health of vulnerable people has to come first.

Although coronavirus is not expected to be particularly dangerous towards most of the population, it has led to deaths among the elderly and to people with pre-existing health conditions.