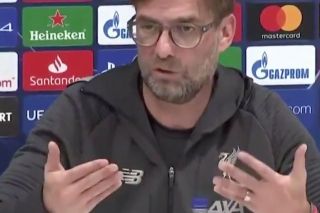 Liverpool boss Jurgen Klopp didn’t take too kindly to one of the questions he received in his pre-match press conference on Tuesday.

The German tactician was speaking to the media ahead of his side’s second leg encounter with Atletico Madrid in their round-of-16 tie in the Champions League.

With the coronavirus crisis causing major problems around Europe with countless games now set to be played behind closed doors while in Italy sporting events have been suspended until next month, Klopp is clearly of the opinion that public safety is of paramount importance.

A reporter from Argentina asked Klopp about playing football behind closed doors and if he was afraid of his players “being exposed” to the virus, and after pushing him on the subject as seen in the video, the Liverpool manager had a one-liner for him that pretty much ended their debate.

“Are you from Madrid?” he began.

“I’m from Argentina, but live in Madrid, but I’m not playing football tomorrow,” replied the ESPN reporter.

“Are you concerned in your city? That is not that special, playing football is not special, we are not the society, we are part of it and we should all be worried.

“That’s exactly the thing I don’t like, you sit there and ask this. You are concerned, but is football worth it to travel? You fly from Madrid, why not stay there? But you think football is worth travelling for. We can sort this with football.

“Your job is to transport information and I hope you do it better than you ask questions. It really gets me angry when you ask me a question and suggest I have a problem that you don’t have.

“The players at the moment are all healthy. Twenty two players not shaking hands is not a sign for society. Are we all in the same boat?”

?"You sit here and ask me this question but fly from Madrid to here? Your job is to transport information and I hope you do it better than you ask questions"

Jurgen Klopp is not impressed by a question about playing football behind closed doors ? pic.twitter.com/rVB3HlGurs