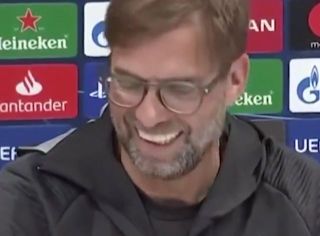 Jurgen Klopp was quizzed on what he expects from Liverpool against Atletico Madrid in their Champions League showdown on Wednesday night, and he had the media room breaking out in laughter with his answer.

The Reds have a 1-0 deficit to turn round if they are to advance from their round-of-16 tie when the two sides meet in the second leg at Anfield this week.

SEE MORE: Video: Jurgen Klopp hits back at reporter after being pushed on coronavirus question

Saul Niguez’s goal has given the Spanish giants the advantage, while Liverpool struggled in the first meeting at the Wanda Metropolitano as they didn’t even register a single shot on target.

That was brought up in the press conference on Tuesday, as seen in the video below, and when asked what he expects this time after Liverpool couldn’t get a shot on target last time out, Klopp came out with a hilariously blunt response.

Time will tell if there will be another magical night at Anfield in midweek as they’ll need to come from behind yet again to advance, but after clashing with another reporter during the same presser as seen in the link above, Klopp was clearly in a better mood with regards to this question…

Reporter: ?"No shots on target in the first leg, what are you expecting this time?"