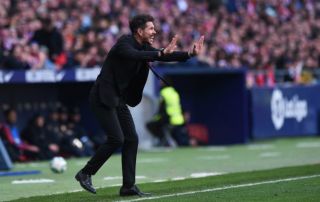 Liverpool face a tough task on Wednesday evening, and Diego Simeone has warned the Reds that he thinks his Atletico Madrid side can hurt them at Anfield.

Having lost the first leg 1-0, LFC face an uphill battle against Atletico Madrid, with both teams desperate for a place in the Champions League quarter-finals.

The opening leg went exactly to plan for Simeone’s men, who setup with two banks of four in a rigid shape, nullifying Liverpool’s front-line extremely well. In fact, Jurgen Klopp’s side failed to register a shot on target across the whole ninety minutes.

This style of football has been closely associated with Atletico during Simeone’s tenure, but it is something that their side take pride in. As quoted by Sky Sports News, the Argentinian has been speaking about his team’s approach to games, leading into Wednesday’s fixture: “If I tell you my plans for the game it wouldn’t be logical. I think they [Liverpool] know how we will play after eight years of being here.”

There is rarely ever an element of surprise when it comes to Simeone’s team selection or setup, with the head coach gaining a distinct reputation for trusting certain players in his squad. Each member of their side serves a specific role or duty, a system that has served success for Atletico down the years.

These instructions tend to relate to their players’ hard-working attitude, something their manager is demanding to see on Wednesday evening: “We almost always compete really well at a high level. Tomorrow the game will demand that we are on top form. We think we can hurt them.”

The upcoming tie promises to be a fascinating matchup, as it’s a clash between attacking firepower vs world-class defensive resilience. Simeone’s reference to them ‘hurting’ Liverpool is key though, as one away goal leaves Jurgen Klopp’s side with it all to do.