Diego Simeone’s side won the first leg at the Wanda Metropolitano courtesy of an early goal from Saul Niguez. Liverpool have the home advantage in the second leg but it will be hard to get two goals against Diego Simeone’s side who have a pretty good defence and one of the best goalkeepers in the world in Jan Oblak at their disposal.

With Alisson absent, Adrian will undoubtedly be in goal and will face probably his biggest test of the season so far. The Spaniard has kept only three clean sheets in 2019/20 and could really do with making it four tonight if Liverpool are to qualify.

In defence, Andrew Robertson should be back in the starting XI after missing the game against Bournemouth. Trent Alexander-Arnold, Joe Gomez and Virgil van Dijk should start as usual.

In midfield, Liverpool could receive a massive boost as there is a good chance of Jordan Henderson starting. The other midfield spots would most likely be occupied by Fabinho and Georginio Wijnaldum although it won’t be much of a surprising if Alex Oxlade-Chamberlain is preferred ahead of the former and Henderson is deployed in a holding role.

Mohamed Salah, Sadio Mane and Roberto Firmino should be starting as usual and a lot will be expected from them tonight. Liverpool’s attackers were not very clinical in front of goal during the first leg but will need to be so tonight if they are to qualify for the quarter-finals. 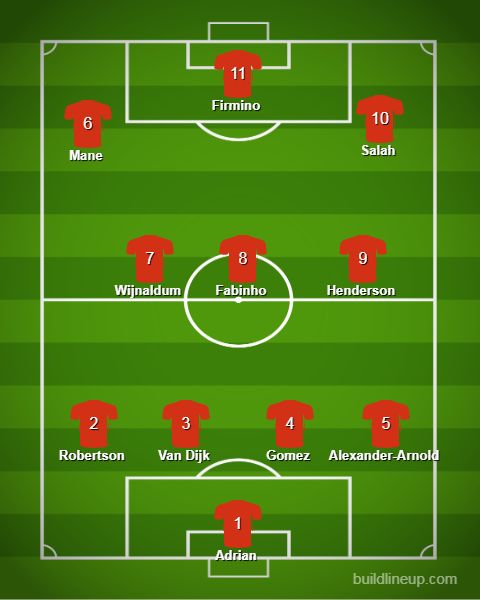