Manchester City are reportedly interested in signing Alessandro Bastoni in the summer.

The 20-year-old joined Inter Milan from Atalanta in 2017 but appeared sporadically for them during his first season while spending his second on loan at Parma. However, Bastoni has stayed at the Nerazzurri for 2019/20, making 17 appearances across all competitions so far with a goal against Lecce to his name.

According to Goal Italy (via Tuttosport), Manchester City are interested in making a summer move for Bastoni who is currently valued at €35 million as claimed by Transfermarkt. The Italian centre-back’s current contract with Inter runs out in 2023.

Man City haven’t been very convincing at the back this season in the absence of Aymeric Laporte and there’s a good chance they could make a move for a defensive reinforcement or two during the summer. Bastoni’s performances have been pretty decent and he could be a suitable addition to Pep Guardiola’s squad but there are better defensive options out there and City could try signing them before making a move for the 20-year-old. 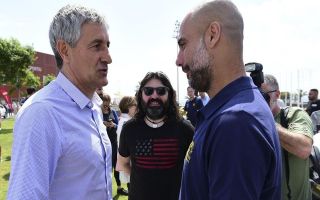