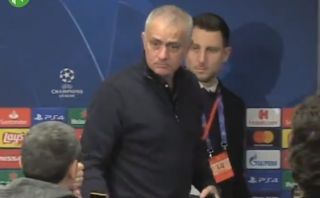 Tottenham manager Jose Mourinho was involved in a genuinely bizarre exchange with a journalist after his side crashed out of the Champions League last night.

Watch the video below as one reporter approaches Mourinho to assure him he shouldn’t worry and that the season will be fine.

If you look closely, the journalist also seems to be filming Mourinho on his phone as he talks to him, and we’re really not sure quite what’s going on here…