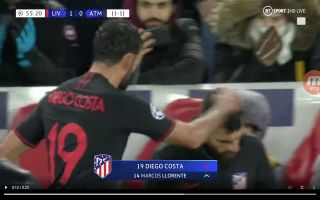 A video of Atletico Madrid striker Diego Costa kicking over a water bottle has surfaced after his substitution against Liverpool this evening.

The Athletic’s James Pearce notes that the former Chelsea star was not happy after being taken off by Diego Simeone.

Costa made way for midfielder Marcos Llorente. The target-man was kept quiet for the entire game by Liverpool’s defenders.

Diego Costa not happy about getting taken off. Boots a water bottle

Take a look at the Spaniard kicking out his frustrations below:

Costa kicks over the medical bag after being subbed off ? #LIVATL pic.twitter.com/gcYAe0asOf