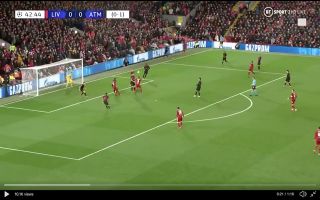 In the 43rd minute of this evening’s Champions League clash between Liverpool and Atletico Madrid, Alex Oxlade-Chamberlain made a darting run to pick up the ball from Mohamed Salah on the right-wing.

The England international managed to fire a dangerous cross into the box from the byline and Gini Wijnaldum showed his unbelievable athleticism to leap above Felipe and head the ball into the back of the net.

The leveller couldn’t have come come at a better time, Jurgen Klopp’s men have all the momentum going into the second-half.

Take a look at the Dutchman’s superb equaliser below:

He always comes up trumps when Liverpool need him ? pic.twitter.com/aGcWm8DIre