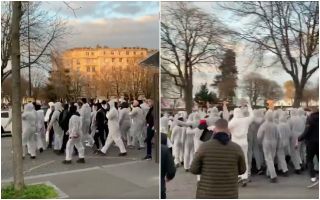 Some Paris Saint-Germain ultras were filmed wearing hazmat-like overalls and masks ahead of this evening’s Champions League tie with Borussia Dortmund.

The club officially announced on Monday that tonight’s game would be played behind closed doors. This hasn’t stopped PSG’s dedicated fans from showing their support.

Another clip also shows that the supporters have lit flares outside of the stadium ahead of tonight’s second-leg.

The Parisians are down 2-1, can Thomas Tuchel’s side overcome a deficit to make the next round?

PSG ultras on their way to the stadium tonight. The match will be played behind closed doors, but the fans will gather at the stadium to support them from outside! ?? pic.twitter.com/vi4MAy7C5r