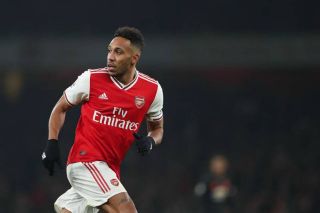 Pierre-Emerick Aubameyang has revealed that he is very happy at Arsenal and wants to remain at the club, as shared via the Gunners’ official site.

The Gabonese striker is arguably his side’s most important player, with nobody in the squad scoring more goals than himself since he joined back in 2018.

With seventeen PL goals this season, only Jamie Vardy has registered more strikes in the league. The 30-year-old is clearly a key member of Mikel Arteta’s squad, and fans will be delighted to hear him voice his pleasure in being at the club.

In an interview on Arsenal’s official website (via the Daily Mail), Aubameyang stated: “It means a lot (to play here). When I was younger I used to watch Arsenal because they always had great players and they won trophies as well. I think it is really a pleasure to be here, I am really happy – that’s my feeling.”

Despite the striker’s comments though, The Mail report that Aubameyang is demanding £300,000-a-week in wages, something the club can’t offer. Should the Gabonese international not lower his demands, it could force Arsenal to cash in on him in the summer, due to restricted finances.

These contract talks represent a ‘30%’ increase on Aubameyang’s current deal, something the club will struggle to meet should they not qualify for Europe next season.

Though these demands are rather lucrative, there can be no denying the importance that the striker possesses in this side. Arsenal look to have a tough scenario on their hands, as plenty of clubs would most likely be interested in Aubameyang’s services.