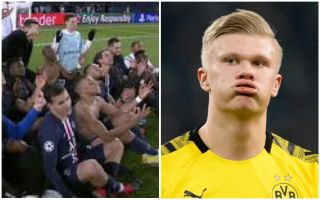 Erling Haaland’s father Alf-Inge has hit out at Paris Saint-Germain players for mocking his son after their Champions League victory this week.

The Ligue 1 giants came back after losing the first leg to dump Dortmund out of the Champions League, and celebrated by copying Haaland’s celebration after scoring in the first game.

Haaland’s father clearly wasn’t impressed by these antics, which did seem a bit harsh on a young player who has enjoyed a tremendous rise this season.

Writing on Instagram, his father said: “Goodbye beautiful Paris. Shame about the result, but well deserved on the day. All the best, showing class on and off the pitch.”

This seems clearly sarcastic from the former Premier League footballer, who must otherwise be thrilled with how his son is getting on this term.

The Norway international has been on fire in front of goal, establishing himself as one of the most exciting young players in the world.

Unfortunately, he couldn’t help Dortmund past PSG, but one imagines we’ll be seeing a lot more of the 19-year-old at this level for years to come.