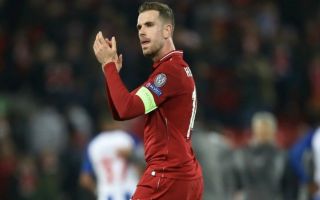 The Reds’ Champions League defence came to an end after losing 2-3 to Los Rojiblancos at Anfield last night which was their first home defeat since September 2018.

Following the match, Henderson thanked the Liverpool supporters on Instagram. The club’s captain posted a picture of the team with the caption: “Not our night but amazing support once again!”

Not our night but amazing support once again! #YNWA

Liverpool produced a good showing during the 90 minutes and were unfortunate to see Andy Robertson’s header hit the crossbar. However, a mistake from Adrian and Atleti making the most out of their scoring opportunities saw them get the better of Jurgen Klopp’s team.

Liverpool’s next match is against Everton at Goodison Park on Monday and they’ll be eager to get all three points. The Reds won 5-2 at Anfield and provided they register a win, they will be just one match away from winning the Premier League. It would also be Carlo Ancelotti’s first home defeat as Everton manager.

“I don’t like it, I hope it doesn’t happen” – Liverpool star James Milner fights to save football in superb post-match interview
More Stories Jordan Henderson