The last 16 of the Europa League commences tomorrow and Manchester United play the first leg of their tie against Austrian club LASK.

Ole Gunnar Solskjaer’s side have been producing some really impressive performances lately and have a good chance of finishing in the top four of the Premier League this season.

Having beaten Manchester City a few days back, the Red Devils will be in good spirits ahead of tomorrow’s fixture at the Linzer Stadion which will be played behind closed doors due to coronavirus fears as claimed by United’s official website.

LASK isn’t a team Manchester United should take lightly and should start some of their first-team regulars while also resting a few of them like David de Gea. Sergio Romero has done pretty well from the game time he has received this season so far. Hence, Solskjaer should start him and he almost certainly will as he has done in the other Europa League fixtures.

In defence, the one regular whose presence would be necessary is Aaron Wan-Bissaka. The 22-year-old has had a fine season so far and his presence on the right flank could be useful for Man United. Eric Bailly should receive a start and we can expect to see him do well. Partnering him could be Victor Lindelof with Harry Maguire benched,

The left-back position should be taken by Brandon Williams who has the capability to become a top player in the future. Solskjaer could bench Luke Shaw and give a start to the youngster.

The two central midfielders for this week’s fixture could be Fred and Scott McTominay. The former has gradually become an important player for Man United this season and he’d be eager to produce an impressive performance against LASK if included in the lineup. McTominay is back from his injury and he could get a nod ahead of Nemanja Matic. The Scottish international will be in good spirits after netting against Man City and we could see him do well in the first leg.

At attacking midfield, Solskjaer could rest Bruno Fernandes and start Juan Mata who could very much do with some game time. The two wingers who could be starting are Daniel James and Mason Greenwood. Both players have done fairly well this season and would be eager to impress in the first leg if given the opportunity to do so.

Odion Ighalo has had a better start to his United career than many expected and he should start against LASK. The Nigerian international could well fetch a goal or two and take the Red Devils closer to qualification to the quarter-finals. 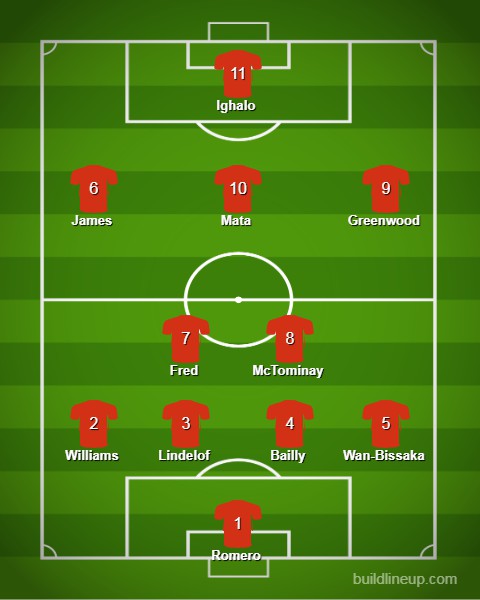