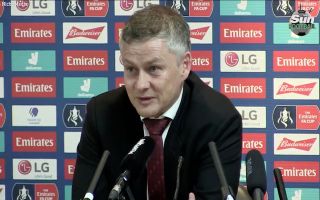 After what can best be described as a mid-season slump, Manchester United have hit a rich vein of form over the last few weeks.

Key to their success has been the form of Bruno Fernandes and Odion Ighalo, but whilst the former is a permanent member of staff, the latter is only on loan from Shanghai Shenhua until the end of the current campaign.

That could be about to change, after United manager, Ole Gunnar Solskjaer, hinted at the same after the Red Devils’ 5-0 victory over LASK in the Europa League.

“Odion has done really well since he came in and he’s enjoying himself,” Manchester Evening News report the Norwegian as saying. “And he will improve and get better but he has qualities we saw in him and we needed and we will still need those qualities for next season, so let’s see what we will do.”

Ighalo wasn’t a ‘big name’ signing by any stretch when he was acquired in January, but he’s quickly endeared himself to the Old Trafford faithful, his colleagues, and the managerial staff.

As a striker, all he can do is continue to put the ball in the back of the net, and thus far, he’s done that on every occasion that Solskjaer has decided to start with him.

If he were to be available on a permanent basis, then United would be foolish to not explore the possibility at the very least.