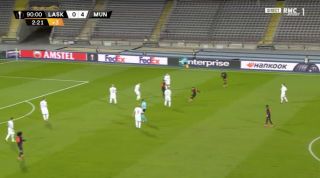 Deep into injury time and with just over 40 seconds left to play in the Europa League tie between LASK and Manchester United, Andreas Pereira won a free-kick for the visitors 35 yards from goal.

After taking it himself via a quick one-two with Fred, the Brazilian let fly from distance.

In truth, LASK goalkeeper, Alexander Schlager, saw it all the way and given that it was directly at him, should’ve had it covered.

Dipping directly in front of him, the flight of the ball deceived the custodian and gave United their fifth goal of the night.