It’s fair to say that Dan James has made a much bigger impact than expected since his Summer move from Swansea.

Many fans weren’t sure what to expect, but then he burst onto the scene early on with his pace and eye for goal helping to cement a place in the team.

READ MORE: Video: Igahlo crashes a volley in off the bar to give Man United the lead vs LASK

Unfortunately he went off the boil for a while, but he’s just scored this lovely solo goal against LASK tonight:

“The goal drought is over!”

Daniel James bags his first goal in 32 games his relief is clear to see ? pic.twitter.com/1E14gUhPqM

There’s a lot to like from Odion Ighalo here as he drops deep to start the move and also takes a defender way to open up the space, but it’s also a fantastic finish from the Welshman. 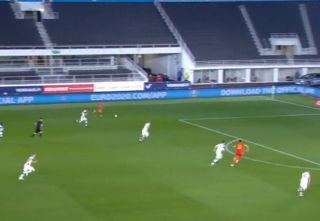