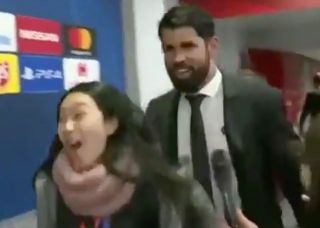 Atletico Madrid forward Diego Costa has received a backlash after pretending to cough on reporters after the win over Liverpool.

The Spanish giants secured a 4-2 win on aggregate over the Reds in their round-of-16 Champions League tie on Wednesday night, dumping the reigning European champions out of the competition.

It took place while the coronavirus outbreak continues to worsen, with the crisis now being officially referred to as a pandemic as countries around the world are desperately attempting to get a grip on it.

From Italy shutting down to games being postponed and played behind closed doors, high profile cases are also now being reported with Juventus defender Daniele Rugani testing positive for the virus.

However, despite all that seriousness and concern, Costa thought it would be funny to walk through the mixed zone at Anfield and pretend to cough on the reporters as he made his way past.

The look on the Atletico PR or media staff member’s face says it all, and unsurprisingly, the Spanish striker has received plenty of criticism for his actions on social media and in the UK papers on Thursday morning.

Evidently it didn’t go down well as he’s the only one laughing in the video too, and it’s hoped that the coronavirus crisis doesn’t get worse with question marks being raised over the decision to allow fans into Anfield on Wednesday night despite all the measures being taken in games elsewhere.

What on earth is happening to this guy?!

The whole world is panic because of coronavirus and Diego Costa think this is a joke? Suspend him from playing @ChampionsLeague pic.twitter.com/JAHxIwbQiu