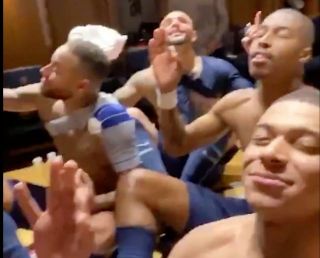 There seemed to be a theme running through PSG celebrations on Wednesday night and it has been perceived as digs at Dortmund ace Erling Haaland.

The starlet is known for his meditating celebration after scoring, but he failed to get on the mark this week as PSG advanced to the quarter-finals of the Champions League with a 3-2 aggregate win over the Bundesliga giants.

Goals from Neymar and Juan Bernat secured a 2-0 win in Paris on Wednesday night to seal their place in the next round, while Haaland was left disappointed as he couldn’t follow up his performance in the first leg.

Based on the videos and images below, it appears as though the PSG players had a good time mocking the talented youngster by copying his celebration, and they even continued in the dressing room after the game.

It’s unclear if there is any real issue between Haaland and the PSG stars for them to troll him though, and so perhaps this is just an innocent way to celebrate their own success.

That said, the fact that they did it multiple times on a night they beat Dortmund and Haaland, it seems a little more than a coincidence and perhaps a message was being sent…

.@KMbappe and PSG did Erling Haaland's signature celebration in the locker room ? pic.twitter.com/SVpheH6ZXY

This shit made my day.. pic.twitter.com/BdwHS7uAMg