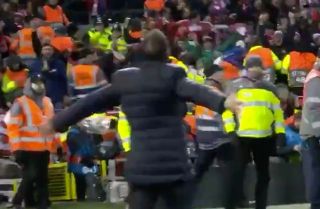 While they may not get universal approval, Diego Simeone’s methods work as Atletico Madrid saw off Liverpool to advance in the Champions League this week.

The Spanish giants secured a 3-2 win over the Reds at Anfield on Wednesday night to advance 4-2 on aggregate to the quarter-finals of the competition.

While Liverpool may have dominated the second leg, they couldn’t take their chances while Atleti defended resolutely and were clinical in extra-time.

That all resulted in a priceless victory for the visitors on Merseyside and they move on to the next round with Simeone clearly loving every minute of it.

As seen in the video below, the Argentine tactician couldn’t help himself but sprint down the touchline towards the away fans as he joined in the celebrations after Alvaro Morata gave them a 3-2 lead on the night.

It’s a great sight to see him enjoy the fruits of his labour, and that of his players, before he quickly recomposes himself and heads back to the dug-out.

Time will tell how far Atletico go in the Champions League this season, but their win over Liverpool at Anfield and having knocked the reigning European champions out will be memories that will last for some time, especially for those who were there to witness it and celebrate it after the full-time whistle…

Look at that celebration!!!!!! pic.twitter.com/8X26ZsnOSw