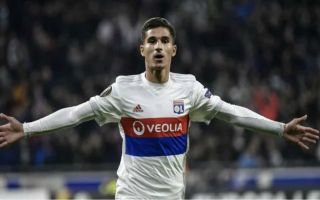 Juventus have reportedly identified Houssem Aouar as an alternative to Paul Pogba.

The Manchester United midfielder has been linked to the Bianconeri for a while now with a report from Don Balon claiming that they were willing to offer €60 million and Aaron Ramsey in exchange for him.

However, Ole Gunnar Solskjaer said that Pogba could stay at Old Trafford next season. As quoted by the Mirror, the Red Devils boss said: “Paul’s our player. He has two years left on his contract, a year plus the option of another. You can expect Paul to be here (next season), yeah.”

Calciomercato claim that even though Pogba remains Juventus’ top target, they will make a move for Aouar if they are unable to sign the 26-year-old. Currently valued at €55 million according to Transfermarkt, the 21-year-old has featured in 37 matches for Lyon this season so far, netting nine goals while providing seven assists.

Given his current form, there’s a very good chance of bigger clubs signing him in the summer. Aouar would be a solid addition to Juventus’ squad if they manage to sign him and there’s a good chance of him receiving ample first-team opportunities.