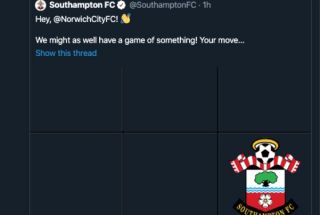 These are strange times indeed, and the lack of football has brought out the creative side in some social media teams.

On Saturday, should the Premier League fixtures have gone ahead as normal, Norwich City were due to host Southampton.

At precisely 3.00pm on Saturday afternoon, when the game was due to kick off, Southampton’s official Twitter account saw an opportunity.

Addressing the official Norwich City account, they challenged their opponents to a game of noughts and crosses.

We might as well have a game of something! Your move… pic.twitter.com/QPTYqkSy3U

What was clearly some light-hearted banter designed to inject some humour into what is fast becoming an unprecedented situation, quickly fell flat on its face.

Just over half an hour later, their Norwich counterparts had still to respond, so a ‘time wasting’ tweet was sent, surely with the hope that Norwich would see it and react in kind.

34: Just past the half hour mark, with #SaintsFC holding their composure despite some early time-wasting tactics from the hosts. ? pic.twitter.com/Df2LWujZja

Unfortunately for Southampton’s social media team, some fifty minutes after the original tweet, there was still no action from the Canaries, forcing a half-time tweet suggesting that ‘only one team making any effort to play here.’

In truth, only one team making any effort to play here, but we’re still waiting for the first real breakthrough. pic.twitter.com/v9PYckI5x2

You have to admire the ingenuity.