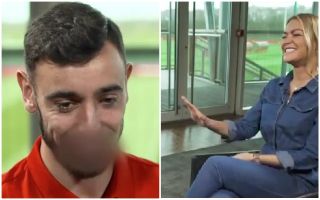 Bruno Fernandes is clearly a big fan of his new chant from Man Utd fans as he even gave his own rendition during an interview with Sky Sports.

The 25-year-old joined the Red Devils in January in a deal that could eventually cost them £67.7m in total, as per BBC Sport, but the results have been immediate.

His arrival has led to a major upturn in form as Ole Gunnar Solskjaer’s side continue to compete for trophies and are well and truly in the race for the Champions League qualification spots in the Premier League, assuming the campaign restarts amid the coronavirus outbreak crisis.

Fernandes has bagged three goals and four assists in nine appearances for United so far, and unsurprisingly that has helped make him an immediate favourite with the fans who have come up with a new chant for him.

As seen in the video below, he clearly knows all the words, including the swear words, with Sky Sports reporter Laura Woods poking fun at him by joking that she couldn’t believe that he swore.

It’s a brilliant interview with the Portuguese international as he comes across really well, but this clip is undoubtedly one of the highlights for Man Utd fans…