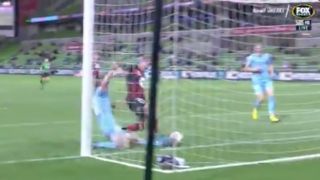 Melbourne City’s Curtis Good has executed what is surely one of the greatest goal-line challenges ever seen.

Playing against Western Sydney Wanderers in the A-League, and with the scores level at 1-1 with 22 minutes left to play, Good’s poor headed clearance allowed the WSW attacker to nip ahead of him and round the keeper who was caught in no man’s land.

Despite being a few yards behind, Good managed to atone for his error by wrapping his foot around the ball on the goal line, just as the striker was about to pull the trigger.

This goal-line clearance from Curtis Good! ?

Incredible scenes from down under ???? pic.twitter.com/i4IidNUGqr

An unbelievable moment as Curtis Good somehow prevents the ball from crossing the line!#MCYvWSW #ALeague pic.twitter.com/1qlNywFwBw