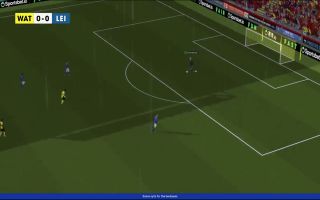 Watford took to Twitter to share that they simulated their suspended Premier League clash with Leicester City using Football Manager.

The Premier League announced yesterday that the top-flight would be suspended until April 4 amid the Coronavirus outbreak in the United Kingdom.

The Hornets uploaded a five-minute highlights package of their simulated game that ended as a 1-1 draw.

The virtual Nigel Pearson wouldn’t have been a happy man after Etienne Capoue was sent off early in the game for a reckless challenge on Dennis Praet.

Leicester made their one-man advantage count in the early stages of the second-half with winger Marc Albrighton drilling the ball into the back of the net after the Hertfordshire outfit failed to deal with a cross.

Roberto Pereyra bagged a late equaliser for Pearson’s side with a fantastic effort from outside the box.

The show must go on ?

Watford vs @LCFC brought to you by @FootballManager!

Football Manager are long-time partners of the club, perhaps this is the closest we’ll get to top-flight action for some time.