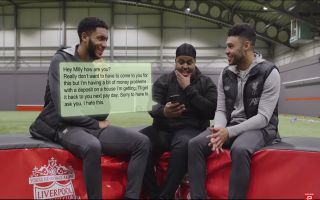 Gomez’ forfeit was to allow Oxlade-Chamberlain to send a text message to any of his contacts. The Ox, alongside presenter Chunkz, decided that they’d drop a message to Reds star James Milner.

The Ox didn’t hold back as he decided that he’d prank Gomez by sending a text about the defender having ‘money problems’.

“Hey Milly how are you? Really don’t want to have to come to you for this but I’m having a bit of money problems with a deposit on a house I’m getting. I’ll get it back to you next pay day. Sorry to have to ask you, hate this.”

After the forfeit was completed at the end of the video, Gomez was quizzed on what Milner’s response was.

Oxlade-Chamberlain lifted the lid on Milner’s response by telling the camera that ‘Milly had it for him.’

It’s amazing to see that Milner was prepared to help out his teammate financially, it’s no wonder the veteran is a vice-captain for Jurgen Klopp’s team.

Take a look at the hilarious video on YouTube below: