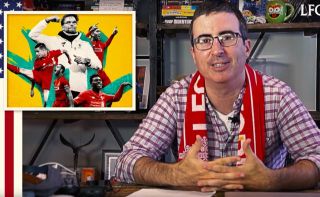 Liverpool-supporting TV presenter and comedian John Oliver has gone on a 30-second rant explaining why he thinks the Reds should still be awarded the Premier League title this season.

The Merseyside giants are 25 points clear at the top, needing just two wins from their remaining nine games, meaning it would be nothing short of miraculous for them to throw it away at this point if the season were allowed to be played out.

MORE: Liverpool should not be awarded the title, says Premier League legend

However, Liverpool face missing out as there is growing talk of the Premier League 2019/20 campaign being voided altogether as the outbreak of coronavirus means it may not be able to finish.

Here’s what Oliver had to say on the matter…

“Here’s the thing, I have waited my entire adult life for this. They were about to win the title for the first time in 30 years.

“They were 25 points ahead of Man City. 25 points! That’s an historic margin and you are telling me this could be for nothing? Mo Salah deserves to be a Premier League champion.

“The coach Jurgen Klopp deserves this and I know he has specifically pointed out in a beautiful essay, you should look up, that we should not worry about the league right now. We should keep things in perspective.

“But the very fact he wrote something like that just makes me want him to win the title even more. I want to see the trophy go through the Shankly gates that doesn’t make me a bad person.

“Okay, okay we are out of time and it’s out of my system now.

“It just feels like they should really give Liverpool the league title. They’ve basically won it. That would actually be fair. It’s not like anyone is gonna catch up from a 25 point deficit.

He added: “We’re gonna need to look out for one another… and not just in terms of containing the transmission of this virus, but also the economic impact that this is going to have for people who aren’t prepared to weather it.”