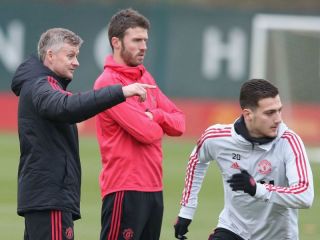 Football clubs up and down England have been putting in place strict regulations and restrictions to their players and staff, following the outbreak of the coronavirus.

Prime Minister Boris Johnson has encouraged the nation’s society to work from home where possible, whilst also advising against visiting public places like bars, cinemas and clubs.

With the Premier League on hold and a return date up in the air, teams have begun to suspend training and close down stadiums. Manchester United officially suspended all training sessions from Tuesday morning, with players being put on regimes to follow at home.

Unsurprisingly, they are one of many sides to take such action this week, following on from an increase in the number of positive coronavirus cases in the country.

Fortunately though, as reported by Andy Mitten in FourFourTwo, no United player has tested positive. Whilst this is good news for the club, it’s still a difficult situation for all those involved. As cited by the same report, it will be a hard time for the players, particularly with many of them living away from their families.

Most of the team’s staff are working from home too, with there being no time frame as to when normality will resume.

Not playing has already effected United’s stock market price, with the club’s value being a billion dollars less than the ‘$3.3 billion quoted at the start of the year.’ Such changes will not dramatically see a change in ownership though, as this is a projected downfall, due to the circumstances at hand.

It’s clearly a strange time for everybody involved with the game at present, not just including the players. Fans around the world are currently deprived of watching their beloved teams, with this having financial implications on all clubs. For now though, it is simply a waiting game, despite authorities being keen to complete the season before the end of June.