Manchester United have reportedly made a huge Paul Pogba transfer decision as they seemingly extend his contract to boost the amount they could make from his sale.

Pogba’s Man Utd future has been in doubt for some time now, with the France international never quite hitting peak form during his time at Old Trafford.

Injuries have not helped his cause this season, but Pogba continues to attract interest from the likes of Real Madrid, Barcelona, Juventus and PSG.

This tweet from the reliable Fabrizio Romano therefore suggests United have wisely triggered their option to extend Pogba’s contract until 2022, but with the option of a sale this summer seemingly still open… 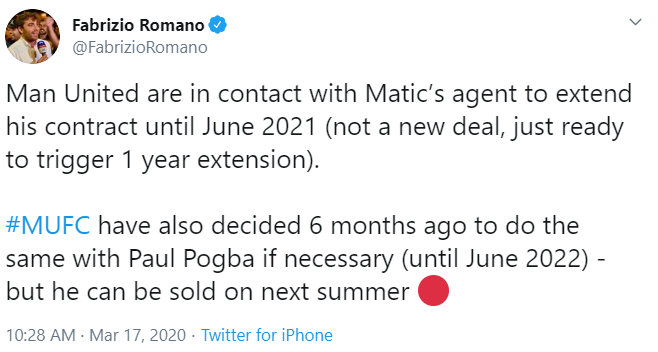 MUFC fans will no doubt have mixed opinions on this, as Pogba can be a top player on his day but has found his day all too rarely during his spell in England.

That may not all be the 26-year-old’s own fault, in fairness, as several other top players like Alexis Sanchez, Romelu Lukaku, Angel Di Maria and Radamel Falcao have also badly struggled to shine at United in the challenging post-Sir Alex Ferguson era.

It might now be for the best that United make this move to ensure they can still get big money from selling Pogba to one of Europe’s super clubs.