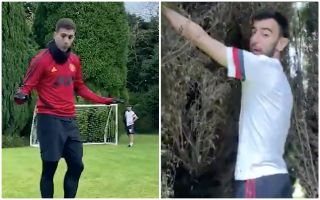 There appears to be quite the bromance building between Man Utd stars Bruno Fernandes and Diogo Dalot as the compatriots keep each other company during the break.

With the coronavirus pandemic forcing the Premier League to stop, the players have been forced to keep busy and stay in shape while they await the resumption of the schedule.

It’s unclear at this stage as to when that will be given the ongoing concern surrounding the outbreak in the country, while the Premier League have suggested that the intention is to continue from April 4 onwards.

Whether that’s possible remains to be seen, but it appears as though Dalot and Fernandes have each other for company at least as the Portuguese duo continue to get on well with the former helping his new teammate settle in Manchester.

As seen in the video below, the pair were busy trolling each other while having a kick about in the garden, while Fernandes was also busy having a dig at his teammate in the interview below with Sky Sports from last week.

While he continues to produce the goods having made a huge impact for Man Utd since his January arrival, it appears as though Fernandes is enjoying life on and off the pitch right now.

So much so, Dalot even insisted in a United podcast this week that he expects the midfielder to become a club legend…

Quarantine life’s ?
After all.. who won it, @B_Fernandes8? ?
Let people decide.. pic.twitter.com/mcgKpquyZ1

Bruno Fernandes revealing that @DalotDiogo's mum cooks them both dinner is so cute ?? pic.twitter.com/gQ09K0CNsj