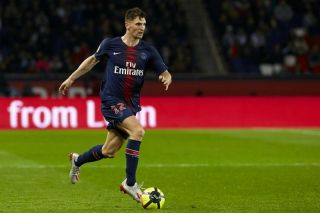 Arsenal have been dealt a big blow in their pursuit of Paris-Saint-Germain defender Thomas Meunier, with ESPN reporting that Borussia Dortmund have agreed a deal for the player.

The 28-year-old is available on a free this summer, with his contract with PSG expiring. According to ESPN, Meunier has agreed personal terms with Dortmund, with the Belgian signing a four-year deal worth around €50m.

This transfer coincides with the German club being set to lose loanee Achraf Hakimi to Real Madrid this summer, with the Moroccan rejoining his parent club. The 21-year-old has been one of the German’s best players over the last two seasons, but they have been quick to acquire a new right-back to fill his void.

Such news does, however, come as a big blow to Arsenal, who were also interested in Meunier. The Gunners were linked with a January move for the defender, but nothing concrete materialised.

Sport Witness had recently linked Mikel Arteta with a summer move for the right-back, but the North London side already look to have been beaten to their transfer target.

Dortmund are usually savvy with their business, and they look to have secured a coup with Meunier arriving on a free.