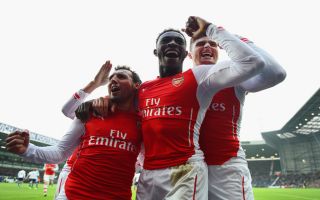 With so many promising careers being lost to injury, it’s always heartwarming when someone overcomes the odds and plays again after being written off.

When Santi Cazorla left Arsenal he had suffered so many awful injuries that retirement seemed like the most probable option, but he had other things in mind.

READ MORE: Boost for Barcelona as they look to sign Arsenal ace for less than his €55m price tag after change in situation

Not only did he manage to play again at Villarreal, he’s become a key member of the team and even managed to gain a recall to the Spanish national side, so it’s clear that he’s defied expectations.

Although Arsenal fans will be gutted to see him playing somewhere else, he was always a favourite at The Emirates so it should also be viewed as a good thing.

There was also some talk about him getting a farewell game against Arsenal, and the latest from The Express suggests that it’s close to happening.

They suggest that talks will happen in the Summer when he’s out of contract, but it does sound more like a one-off farewell rather than returning to Arsenal full time.

Even if it is just one game, it should give the fans a chance to give him a proper farewell at least.