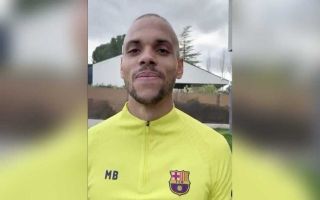 Barcelona star Martin Braithwaite has taken to social media to share a video of himself and his two children lining up whilst listening to the Champions League anthem.

The Blaugrana were scheduled to play the second-leg of their knockout tie against Napoli tonight, the Coronavirus has since halted most of the world’s major sports leagues.

Barcelona only officially signed the Dane less than a month ago, with the Catalan giants parting with €18m, as per BBC Sport, to sign the ace in an emergency transfer.

Video: Martin Braithwaite could be Barcelona’s hero as he puts them ahead against Sevilla March 3, 2021 22:09
FC Barcelona