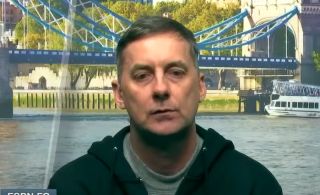 The Egypt international has been a joy to watch since he joined Liverpool from Roma, but it seems Hutchison doesn’t particularly rate him due to his struggles in getting the basics right.

Watch the video clip above as the ESPN pundit, who spent four years at Anfield in the early 90s, slams Salah and questions why Jurgen Klopp and his coaching staff haven’t worked on some areas of his game, such as passing.

“They’re the same age but it’s Mo Salah that I watch every single week, and his numbers are astonishing don’t get me wrong and you can’t take that away from Mo Salah, but I think Stevie said a couple of weeks back when we were talking about the Champions League just before the Atletico Madrid game, you watch Mo Salah and the guy does genius things but he does the most basic things so bad it’s untrue.

“He can’t pass a ball five yards, he seems to keep playing this ball where he tries to nutmeg everyone from whatever side he’s on, if he’s coming off the right flank onto his left, tries to play it to a striker through a body of players that’s never, ever on.

“And you watch him and go ‘Surely this has been coached, surely Jurgen Klopp and his coaching staff have tried to coach Mo Salah, and he does the basic things really badly, yet his numbers are frightening and he scores a ridiculous amount of goals in the Premier League and the Champions League.

“So I would disagree, I think if you’re going to sell anyone and you had to sell one – don’t get me wrong, I wouldn’t sell any if I was Jurgen Klopp – but if one was to go and you offered Mo Salah for someone like Jadon Sancho, I maybe would take that swap.”