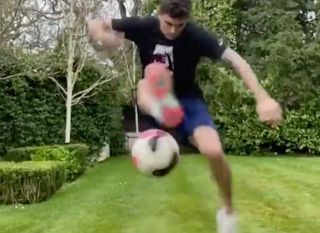 With football on hold, players across the world are having to keep themselves busy and active and Chelsea ace Christian Pulisic is no different.

Many squads have even been told to self-isolate after a number of high-profile cases, including Blues star Callum Hudson-Odoi testing positive for coronavirus amid the pandemic.

It remains to be seen when football returns, but players will undoubtedly be told by coaching staff to stay sharp over the break and to be prepared for the resumption of the campaign, whenever that may be.

However, Pulisic’s first TikTok video clearly didn’t go to plan as he wanted to show off his skills as he made his debut on the hugely popular app.

As seen in the video below, it turned into an absolute disaster as he ended up standing on the ball and landing on his backside. To his credit, he still published the video and saw the funny side of it.