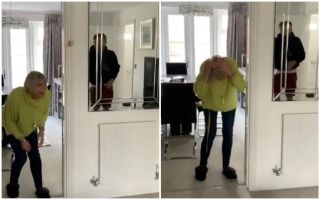 Ben Chilwell appears to have taken the #stayathome challenges to another level, footballers have been finding unique ways to keep themselves entertained while major leagues are suspended due to the Coronavirus.

Chilwell challenged his mother to head five ping pong balls into a bin in five seconds. The England international’s mother headed away the first four balls, although none appeared to end up in the bin.

23-year-old Chilwell pranked his mother with the fifth attempt, the star threw an egg instead of a ping pong ball, the raw egg ultimately cracked on her head.

The egg yolk spilled into Chilwell’s mother’s hair, with some even falling onto the carpet – that might be a hard stain to clean up.

Chilwell burst out laughing after the moment.

5 ping pong balls in the bin in 5 seconds. See how my mum got on ?????? #stayathome pic.twitter.com/EK11GjFkwX