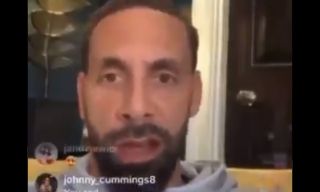 Rio Ferdinand has singled out Arsenal legend Thierry Henry as a player he knew would spook players before games even started.

Watch the video below as the Metro show an extract of Ferdinand doing a question and answer session via social media.

Rio Ferdinand talking about how @ThierryHenry already had players SHOOK in the tunnel ?

The greatest the Premier League has ever seen… pic.twitter.com/NdF8aXDyzZ

Speaking about Henry, Ferdinand says even top defenders would “shrink” at the sight of the Frenchman, who is undoubtedly one of the finest to ever play in the English top flight.

Henry scored 228 goals for Arsenal in total and won two Premier League titles with the Gunners.

Ferdinand didn’t have such a bad career himself, of course, so for him to speak about Henry in these glowing terms is some compliment.