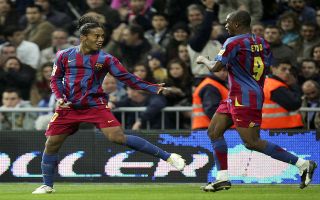 Goal have translated the lovely birthday message that Samuel Eto’o has for former Barcelona teammate Ronaldinho, who is currently in prison in Paraguay.

As per Goal’s report, football icon Ronaldinho is currently behind bars after being arrested for using a fake passport to enter Paraguay.

Ronaldinho turned 40 yesterday and Eto’o showed his class with a heartwarming message to his former teammate. The striker described the Brazilian great as a ‘friend’ and ‘brother’.

Here’s what Eto’o had to say about his old teammate, as per Goal’s translated quotes:

“Hello brother, I have no words, brother. I don’t even know what to say, we are talking to see how we can encourage you,”

“You are my brother, my friend. I can’t imagine what you’re going through. I can only ask you to have strength and to pray a lot.

“I hope that all this can be solved soon, because you were frankly a good person and a good friend. From here, the black loves you very much and you can count on me for everything you need.

Ronaldinho is one of the greatest players of his generation, the ace was sensational for AC Milan and Barcelona. The attacker won the prestigious Ballon d’Or award in 2005.

Take a look at Eto’o’s message below:

Ronaldinho picked up plenty of individual accolades during his illustrious career, the ace is a two FIFA World Player of the Year.

The tricky attacker won La Liga twice with Barcelona, Ronaldinho also helped the Catalan outfit to lifting the Champions League in the 2005/06 season.

After leaving Spain, he lifted the Serie A title with AC Milan.

On the international stage, Ronaldinho’s achievements are just as impressive. The star helped his country win the Copa America in 1999 and the World Cup in 2002. The magical dribbler won 97 caps for the Seleção.