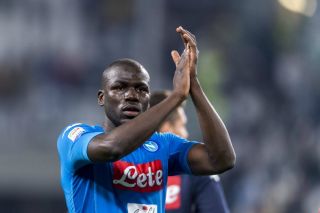 The Kalidou Koulibaly Man United transfer could now reportedly go through for a bargain fee of just £80million as Napoli decide to sell.

This is a huge development in the Koulibaly Man United transfer saga, which has dragged on for what feels like more than a year now.

MORE: Manchester United prepared to listen to offers for duo this summer

Man Utd could do with strengthening in defence once again in the next transfer window, despite also spending big on signing Harry Maguire from Leicester City last summer.

It’s clear that Ole Gunnar Solskjaer’s side remain a work-in-progress, and someone like Koulibaly could make a big difference in terms of turning the club into genuine Premier League title contenders.

The Senegal international is up there with Virgil van Dijk as one of the best centre-backs in the world, and he could have the same kind of impact at Old Trafford as the Dutchman has had at Anfield.

Latest transfer reports claim United remain keen on Koulibaly, who has been cleared to leave Napoli for £80m – a bargain considering it’s the same MUFC paid for Maguire and only slightly more than Liverpool paid for Van Dijk.

It had previously been thought the 28-year-old could cost as much as £100m or more, but a report from the Mirror claims Napoli chief Aurelio de Laurentiis has decided he will now cash in for a great deal less than that now.