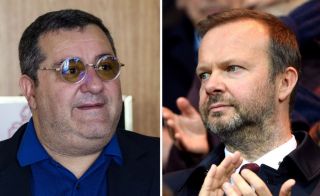 The Red Devils could really do without all the distracting Pogba headlines that have marred the midfielder’s time at Old Trafford, with the former Juventus man never quite seeming to settle in England.

Pogba looked one of the finest players in the world during his time in Serie A, but we haven’t seen that kind of form often enough from him in Manchester.

According to the Daily Mirror, Woodward and Raiola are now talking again to try and resolve the situation as rumours continue to do the rounds in the press.

The report explains that both Woodward and Pogba have asked Raiola to be less confrontational and tone down the criticisms of United when he speaks publicly.

Paul Pogba has had his difficulties at Manchester United

Raiola is known for being outspoken and the Mirror carries some of his previous quotes attacking United, including slamming them for keeping Pogba prisoner.

It will be interesting to see how these talks between Woodward and Raiola can progress and if MUFC can feel the benefit from it.