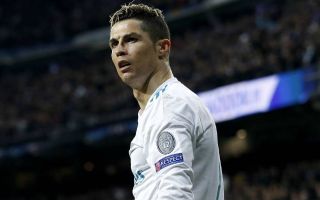 Real Madrid youngster Manu Hernando has reportedly not been involved in a training session with the senior squad since 2018 due to an altercation with Cristiano Ronaldo.

The 21-year-old is currently on loan at Racing Santander where has enjoyed more opportunities and has made 10 appearances so far this season.

However, according to Marca, he’ll face further uncertainty over his future when he returns to the Bernabeu this summer, as it’s suggested that he hasn’t been involved in a senior training session since 2018.

That dates back to an altercation he had with Ronaldo while he was still plying his trade in Spain, with Los Blancos chasing the Champions League at the time.

It’s noted that during a training game, Ronaldo and Hernando both contested a loose ball, only for the latter to arrive late and he ended up flooring the Portuguese superstar.

Despite his efforts to apologise, Ronaldo wasn’t having any of it and was left furious, as per the report above, and that has turned out to be the last session that he had with the first team.

Whether the two things are directly linked will be up for debate as it could perhaps just be an unfortunate coincidence, but putting one of the world’s biggest stars at risk of being injured at a crucial time in the campaign has seemingly cost Hernando his chance at Real Madrid.

Time will tell if the situation changes ahead of next season, although with Ronaldo having already moved on to Juventus in 2018, that doesn’t seem to have made much of a difference to this situation.