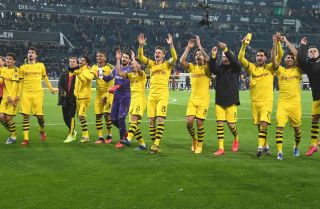 Bayern Munich and Borussia Dortmund players have reportedly both agreed to take pay cuts to help the clubs through the coronavirus crisis.

According to German newspaper Bild, as translated by the Daily Mail, Dortmund’s stars have agreed to have as much as 20% of their wages cut while this crisis goes on.

Dortmund manager Lucien Favre could also agree to a wage cut, while it’s also been suggested wages could be cut by 10% if games can resume, but behind closed doors, according to the report.

The lack of matchday revenue could really hit some clubs, so it’s good to see players are willing to help out and keep their teams in a slightly more healthy financial situation.

It is not yet clear when any football will return, but the Financial Times have reported on a study by Oxford University that could give some hope to us all.

Testing would seemingly be required to prove their model accurate, but the study has suggested that as much as half the UK population may have already developed some immunity to coronavirus, meaning a shorter lockdown would be required.

We can only hope that football can soon return and at the very least give us all something to keep us a bit more entertained even if we remain stuck indoors for a bit longer!