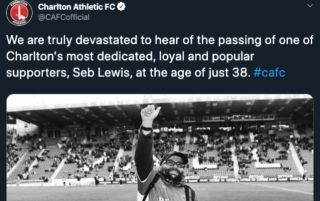 Championship club, Charlton Athletic, paid tribute on Thursday to one of their most loyal supporters, who has died from the coronavirus.

According to The Sun, Seb Lewis was just 38 years of age and had attended an incredible 1,076 consecutive matches before his death.

We are truly devastated to hear of the passing of one of Charlton’s most dedicated, loyal and popular supporters, Seb Lewis, at the age of just 38. #cafc pic.twitter.com/KNacd5qEBy

His astonishing dedication to the south London club saw him follow them up and down the country and meant that he hadn’t missed a match, home or away, since February 1998.

Once news of his death began to spread, the club, as well as current and former players, took to social media to express their sorrow.

The Sun also report that the 38-year-old had only recently posted a video of himself on social media, whilst in hospital and hooked up to an oxygen mask, but sadly, despite the best efforts of the NHS, it wasn’t enough.

Seb was the heart and soul of the Charlton family and was so proud of his achievement of attending every single game, home and away since February 1998. His record stands at 1,076 consecutive fixtures. #cafc pic.twitter.com/Y5WubJ9ePx

#RIPSeb Gone but never forgotten?. Once an Addick, Always an Addick Home & Away. #MadeInCharlton ?????#CAFC https://t.co/dGCD9mSyNv

So sad to hear the news about Seb! The most dedicated and loyal football fan I’ve ever known and such a fun character, you’ll be truly missed by us all! #RIPSeb pic.twitter.com/HpyipdHPx8